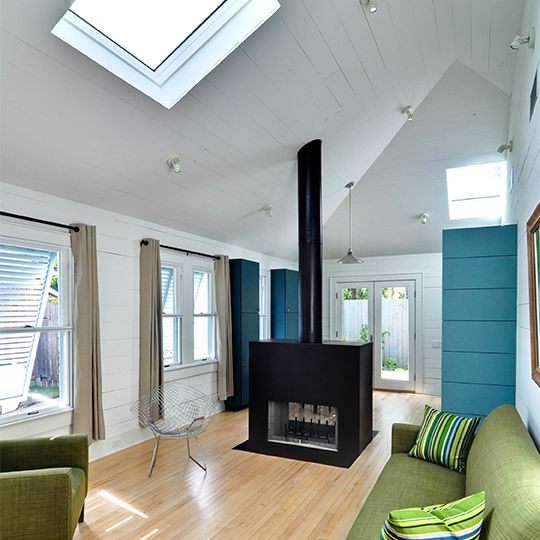 The American Institute of Architects Houston has announced the winners of its 2013 Design Awards. Serving as this year’s jurors were Craig Dykers of Snohetta, Kevin Kudo-King of Olson Kundig Architects, and Gullivar Shepard of Michael Van Valkenburgh Associates. After careful deliberation the jury selected the Galveston Residence designed by kinneymorrow Architecture as a winner of the Less Than 50,000 SF category. Kinneymorrow’s design team consisted of Michael Morrow and Taryn Kinney who collaborated with INSIGHT Structures and Building Solutions to fulfill their vision. The residence was described by kinneymorrow architecture as:

The project repurposed a 1930’s tract house just blocks from the beach into a new residence for a young professional. The existing program contained rooms obsolete and inflexible to the new owner with strict distinctions between common and individual spaces. The house in no way reflected its seaside proximity.

In response, seven existing rooms were reorganized into three new zones. Zone 1, formerly dining room, breakfast room, and kitchen, became the communal core with living, kitchen, dining in a single volume. Zone 2, formerly the individual suite with closet/utility, bath, and bedroom became the flexible Zone 3. Day-to-day the space is a study and power room. When guests visit an insulated barn door secludes the area into a private bedroom and bath.

The interior volumes were rethought to maximize day-lighting and ventilation and to imbue a coastal feel to a formerly dark and suburban-feeling house. Most ceilings are vaulted an new apertures in the roof plane bathe the house in natural light that changes through the course of the day.

Most finishes are original or salvaged. The vertical walls are the existing shiplap while the vaulted surfaces are reclaimed from demolished walls or other structures. The floors are reclaimed from the racquet ball courts at the former downtown Houston YMCA. Original windows are preserved with interior insulating windows and shutters added to address energy, privacy, and windstorm issues.

Congratulations to kinneymorrow architecture for a job well done!